It’s obvious that live streaming is now the internet’s biggest trend. This is why almost all social media platforms have their own version of it. And, it is no longer a surprise why now and then, huge updates make live video sharing more enjoyable. However, the biggest ever yet comes from Periscope’s latest feature – Producer. 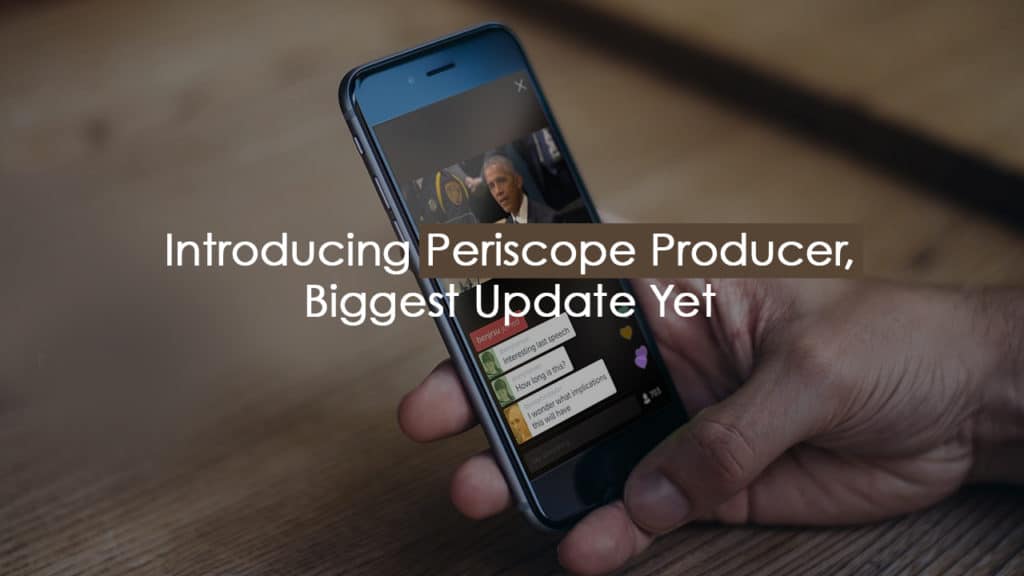 What Is Periscope Producer

One of the biggest cons Periscope has –also its greatest advantage – is the limitation of only using your smartphone to broadcast live videos. You can use nothing else but your phone.

If your mobile device’s camera isn’t amazing, then it can really affect all your videos and your performance. This has also been the primary challenge for brands, media organizations, and other professional video creators – but it all changes today.

Newly announced Periscope Producer allows brands and other organizations to produce high-quality live videos using external cameras. You can also use Xbox One, laptops, webcams, other devices capable of taking videos, or anything with RTMP (Real-Time Messaging Protocol). This is a huge game changer for brands as they can now stream just about anything with no boundaries.

With this new feature, it allows users to enhance their creativity further. Soon enough, it should no longer be a surprise to see live streams using multiple cameras, live Skype calls, external videos, graphics, animation, live in-game captures, and just about anything coming from anyone – provided to you by Periscope Producer.

Periscope Producer is already used by some of the biggest names in the world, namely: Sky News, ABC News, “Dancing with the Stars”, Louis Vuitton, Xbox, Univision, Telemundo, El Pais, FOX, Disney, The Academy Awards, Cheddar, and others.

[tweetthis twitter_handles=”@1alexkhan”]What is Periscope Producer and how can you apply for it?[/tweetthis]

Is This Update for Everyone?

In reality, it actually is. However, it is only ideal for brands, video producers, and media organization that have a huge number of followers – big-time production for big scale promotions. For the default Periscope, it should suffice nearly every user who uses the live streaming sharing app just for fun and entertainment, and as personal use.

Producer could possibly be the next big Youtube – in terms of live events. This gives brands to invest on a new platform that has a great repute for live streaming.  At the moment, only iOS devices have the capability for this to work but the Android version is on its way. If you think Producers suits you well or for your brand, you can apply right here: http://t.co/periscopeproducer

2 thoughts on “All You Need To Know About Periscope Producer”